The President was awarded the honorable title of Top Ten 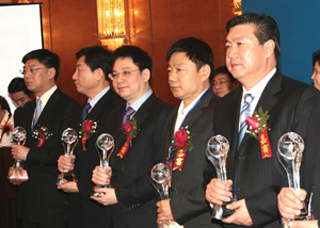 Together with Mr. Li Feilie to receive the same honorable title were Mr. Li Jiacheng, Chairman of the Board of Directors of Cheung Kong Holdings, Mr. Zhang Ruiming, CEO of Haier Group, Mr. Jin Zhiguo of Tsingdao Beer Corporation, Mr. Wang Wenbiao, President of Yili Resource Group, Mr. Liu Qingquan, Chairman of Wandashan Dairy Corporation, Mr. Zhang Weigong, Chairman of Sunshine P&C Insurance, Mr. Chang Dechuan, Chairman of Board of Directors of Qingdao Port (Group) Corporation, Mr. Xu Jiayin, Chairman of Board of Directors of Guangzhou Hengda Group, and Mr. Yang Changheng, Chairman of China Metallurgical Group Corporation, all of whom are highly renowned entrepreneurs in China.
This time's event, which was co-hosted by People website and China Enterprise Culture Improvement Association, has created strong social repercussion in China, and was one of the most authoritative selections within the country. The first reason is that the hosts are well regarded as institutions with high level of social credibility. The network center of People's Daily (People website) was behind the planning and operation of this selection event throughout its entire process. As the mouthpiece of the China Communist Party, guided by the principles of being responsible for the party and the mass, ever since its foundation the People website deemed the communication of China's voice toward the whole world as its own obligation; while maintaining the authority of People's Daily, it strives to enhance its appeal, readability, and affinity by taking full advantage of the features of Internet, and has established its image of "Authority media, People's website" with the authoritativeness, timeliness, diversity and commenting features of its news reporting, thus becoming one of the largest and most authoritative Chinese news website on the Internet. The second reason is that the event has unprecedented scale, strict procedure, and wide influence. Starting from August 2006, the deeds of candidates / candidate enterprises were put on public display on the People website, open for public voting, which was finally evaluated by experts from all social sectors and the organization committee with the results determined. By early February 2007 when the event was closed, altogether over 100 famous entrepreneurs and more than 300 domestic and oversea major enterprises and nearly 500 famous brands participated in the survey of public display, with the overall accessing times exceeding 10 million and receiving over four million effective votes. The third reason is that all participating entrepreneurs are "heavy weight" personalities in the industry with outstanding achievements, and the starting level is high and requirements are tough. As a result, it is arguably one of the most authoritative selection and awarding domestic events targeting at enterprises and entrepreneurs in recent years.
The most important prize in this time's event was top ten "People's Respected Entrepreneurs", for which there were well over 100 entrepreneurs participating in the public display and balloting; as the prize is heavy in influence, few in number of title, resulting in exceptionally fierce competition. Mr. Li Feilie of Feishang Group won the people's respect and trust and won the laurel with relatively large advantageous margin with his unremitting pursuit of his career, great commercial achievements, and unselfish actions in rewarding the society. According to incomplete statistics, in the past five years Mr. Li Feilie and the Feishang Group under his command donated a total of over 10 million Yuan to all sectors of the society, involving itself heavily in the assistance to the impoverished, promotion of education, and reconstruction of disaster stricken area. During the video interview with People website, Mr. Li Feilie expressed refreshingly profound insight and unique opinions regarding social obligations of enterprises. He said, as an entrepreneur, one had to first make a good job of running the enterprise, letting the enterprise operate with sustainable prospective, consolidating the business foundation, seeking continual development, thus enlarging employment, increasing state and local tax revenue, which constituted basic obligations of the enterprise, and also the most prominent social obligation for Chinese enterprises. We all know Feishang Group advocate the principle of "Developing industry to prosper the country and reward the nation", how can this be done? The first thing is to make the enterprise stronger, larger, more well-established, and more oriented toward sustainable development, so as to increase tax revenue, and enlarge employment, only by doing this way can we make the people wealthier and the country stronger. In recent years, Feishang Group has contributed a total of 2.68 billion Yuan in tax revenue to the state and local tax office, and provided over 25,000 job opportunities over a long period of time, which fully demonstrated Feishang Group's contribution toward the state and people.
The acquisition of the title of "Top Ten People's Respected Entrepreneurs" reflects a positive affirmation of the grand ideal and active practice of "Developing industry to prosper the country and reward the nation" of Mr. Li Feilie and Feishang Group by the society and the people.

Previous The Chairman serve the post of Vice President of the "Chinese-American Entrepreneur United Committee"
CEO of CHNR meets with John Snow, the former Secretary of the U.S. Treasury Next